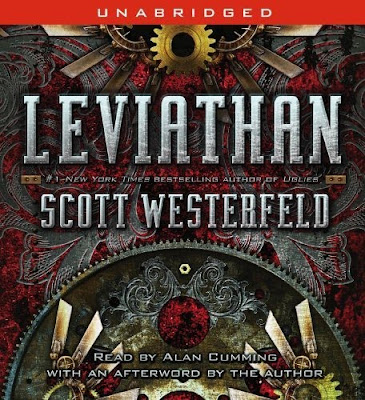 So last week, I blogged about Scott Westerfeld. I've been listening to Leviathan and Behemoth as I've worked on various projects and thought I'd let you know what I thought.

From School Library Journal
Starred Review. Grade 7 Up—This is World War I as never seen before. The story begins the same: on June 28, 1914, Archduke Franz Ferdinand and his wife are assassinated, triggering a sequence of alliances that plunges the world into war. But that is where the similarity ends. This global conflict is between the Clankers, who put their faith in machines, and the Darwinists, whose technology is based on the development of new species. After the assassination of his parents, Prince Aleksandar's people turn on him. Accompanied by a small group of loyal servants, the young Clanker flees Austria in a Cyklop Stormwalker, a war machine that walks on two legs. Meanwhile, as Deryn Sharp trains to be an airman with the British Air Service, she prays that no one will discover that she is a girl. She serves on the Leviathan, a massive biological airship that resembles an enormous flying whale and functions as a self-contained ecosystem. When it crashes in Switzerland, the two teens cross paths, and suddenly the line between enemy and ally is no longer clearly defined. The ending leaves plenty of room for a sequel, and that's a good thing because readers will be begging for more. Enhanced by Thompson's intricate black-and-white illustrations, Westerfeld's brilliantly constructed imaginary world will capture readers from the first page. Full of nonstop action, this steampunk adventure is sure to become a classic.—Heather M. Campbell, formerly at Philip S. Miller Library, Castle Rock, CO END

Overall, I liked both books-espcecially b/c I got to listen to German accents. There's lots of action, a slight romance. Mostly, I enjoyed the creatures Westerfeld dreamed up. I give it a PG rating for mild violence and there's no sex at all, so you can let your kids read it. Most of his books seemed aimed more at girls, but I think it's a series that boys would really like and I'm suggesting it to my nephew.
Check out other posts on books here.
Posted by Tara @ Tales of a Trophy Wife at Thursday, March 03, 2011