Get rid of Bees and Wasps with Dish Soap

UPDATE:  It kills wasps as well-although not as fast.  I used "palmolive" and I'm not sure it that makes a difference or not. Another problem is that it lacks the chemical in commercial products that prevents them from coming back. In a pinch, I would use dish soap, but overall I just feel like the commercial stuff gets the job done better.


Disclaimer: I'm a big fan of bees-  They are a great way to pollinate all our plants, fruits and vegetables. If we killed all the bees we would also be killing all the fruits, veggies and plants. They make honey and beeswax to make candles etc. They are also very fashion forward in their black and yellow stripes. If they aren't bothering you, leave them alone. If at all possible, call beekeeper to see if he can remove the hive. Many of them will get them for free. Here's a link to the Texas Beekeepers. Only ever kill bees as a last resort.

2 Days after we moved into our 2nd home, my hubby and the kids walk out the garage and to the end of the block to get the mail.  In the very short minutes that it took, our garage turned into a National Geographic special.  A HUGE swarm of bees came into our garage.  We think the queen went up into a hole in the drywall of the corner by the garage door.  We shut the garage, trapping half of the swarm outside.  We hoped they'd go away, but the next morning, they were still there in full force and humming loudly-they sounded like a small engine and looked like a big black cloud.  If I was watching a nature special, I would have been fascinated, but since it was not on TV but in my garage, I was freaking out.


I started calling some exterminators, but we didn't have an extra $50, much less the several hundreds I was quoted.  Many told me that if the queen was setting up a hive in my walls, my grand  total could run into the thousands for honey removal.  This gave me nightmares of huge bee colonies producing ever increasing gallons of honey daily in my walls.

I called a few bee keepers to see if they would come and get them, but wasn't having any luck. Then I got the sweetest lady on the phone.  Her husband had passed away, but she told me that they best way to get rid of unwanted bees was to put Dawn dish soap in a garden sprayer, hook it up to the hose, and spray them down.

My husband thought it was too risky to battle a swarm of bees (he's allergic and I was 6 months pregnant). Disclaimer #2-bee swarms can be dangerous and so you should listen to my husband and call a pro too.

I'm a cheap skate and thought it was worth the risk.  My dad (also a cheapskate and a big fan of DIY) volunteered to take one for the team.


I wish we had video.  I thought it would completely fail, or work like bug spray (kill some slowly, while the rest of them swarm you).  The entire swarm dropped to the ground less than second after the foam touched them. I don't know if other detergents work as well, the lady said to use Dawn and that's what we had. (I think it also might work on wasps and hornets, but I don't have any personal experience)


Here's a page from the family scrapbook: 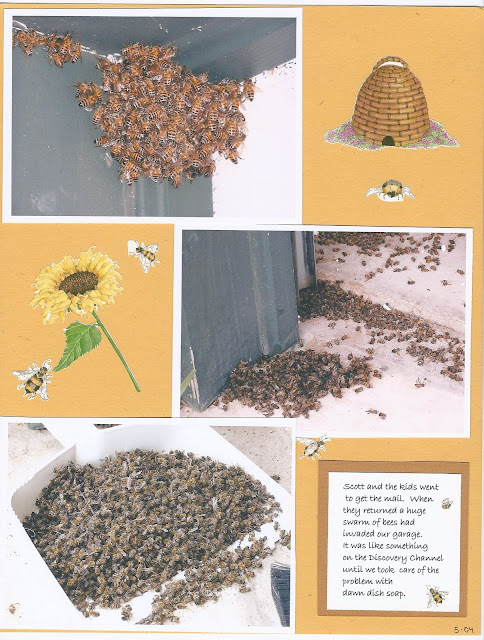 I don't know much about bees, but once we got the queen, they rest died within a few hours.  Every inch of our garage was covered with bees. One dead bee doesn't stink, but this many bees smelled worse than awful.  We swept them all up.
We wished that we could have somehow moved the bees to a safer location, but when that was no longer an option, we relieved to spend less than a dollar and w/out any toxic chemicals.
Linking up here.
More helpful hints.
Posted by Tara @ Tales of a Trophy Wife at Tuesday, June 14, 2011