To supplement the lesson, I’m going to tell the following story from a talk by Dieter F. Uchtdorf given in the April 2009 conference. Talk found here (http://lds.org/general-conference/2009/04/we-are-doing-a-great-work-and-cannot-come-down?lang=eng)


The Story of the Lightbulb, or Losing Sight of What Matters Most
On a dark December night 36 years ago, a Lockheed 1011 jumbo jet crashed into the Florida Everglades, killing over 100 people. This terrible accident was one of the deadliest crashes in the history of the United States.
A curious thing about this accident is that all vital parts and systems of the airplane were functioning perfectly—the plane could have easily landed safely at its destination in Miami, only 20 miles (32km) away.
During the final approach, however, the crew noticed that one green light had failed to illuminate—a light that indicates whether or not the nose landing gear has extended successfully. The pilots discontinued the approach, set the aircraft into a circling holding pattern over the pitch-black Everglades, and turned their attention toward investigating the problem.
They became so preoccupied with their search that they failed to realize the plane was gradually descending closer and closer toward the dark swamp below. By the time someone noticed what was happening, it was too late to avoid the disaster.
After the accident, investigators tried to determine the cause. The landing gear had indeed lowered properly. The plane was in perfect mechanical condition. Everything was working properly—all except one thing: a single burned-out lightbulb. That tiny bulb—worth about 20 cents—started the chain of events that ultimately led to the tragic death of over 100 people.
Of course, the malfunctioning lightbulb didn’t cause the accident; it happened because the crew placed its focus on something that seemed to matter at the moment while losing sight of what mattered most.

Then we will discuss things that can become our own personal “flashing green bulb” and ways that we can keep an eternal perspective.

I made the following handout. PDF here.
I cut out magnifying glasses using my Cricut Everyday Paper dolls cartridge (under the scientist –size 4 inch). If you don’t have a cricut you could easily cut one out, or find one in clip art. Then I used a small brad so that the lens can move over either the plane or the flashing green bulb. I wrote “EP” on the handle for “eternal perspective”. 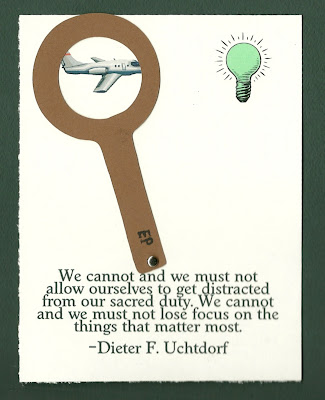 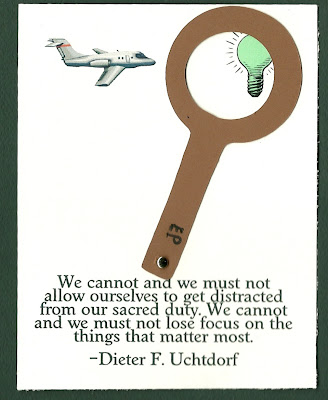 Here are some other ideas for YW here.,

-And a whole bunch more here: