First of all, did you notice the top of the page? Now you can click on whatever topic you're interested in and see all my posts. I love that I can do that w/ no computer programing skills. 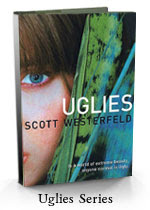 I have a daughter in Middle School who loves to read. I try and steer her to books I like and steer her away from Books I don't think are appropriate for kids. I'm amazed sometimes at what passes for "juvenile fiction". We both been reading a lot of Scott Westerfeld. He has several series that we've both enjoyed and I thought I'd spotlight him this week.

Westerfeld has his own blog if you want some more info. I cut-n-paste some descriptions from his blog for your convenience (it's the stuff w/ in the quotation marks).


Uglies"Uglies is set in a world in which everyone has an operation when they turn sixteen, making them supermodel beautiful. Big eyes, full lips, no one fat or skinny. You might think this is a good thing, but it’s not. Especially if you’re one of the Smokies, a bunch of radical teens who’ve decided they want to keep their own faces. (How anti-social of them.)

We both really like the first one, but the 2nd and 3rd were very repetitive. The final one is the series was really good and it reminds me a little of blogging. For the most part they were pretty clean. There is some mention of kids sneaking away into a "pleasure garden", but nothing sexually graphic. There is some violence. Substance abuse is also mentioned, but always in a negative light. Overall, I like the message it sends to young girls about beauty.

The Midnighters
"Okay, this is how it works:

There aren't really 24 hours in the day, there are 25. Got that? The extra one is rolled up too tight to see, and it flashes past most people in an instant. "Most people" means boring, normal, daylight people. But people born exactly at the instant of midnight (all together now: "midnighters") get to walk around while the rest of you suckers are frozen.

So check your birth certificate. If you were born at the stroke of midnight, you might be one of us. By the way, this is real midnight, not lame-time-zone- or daylight-savings-time-adjusted midnight. Every spot on earth has its own exact moment when the sun is right under our feet. Suffice it to say that if you were born anytime between about 11:30PM and 1:30AM, you could be a midnighter. Confused? Also, the secret hour doesn't seem to happen everywhere. Bixby is the only place that time freezes, as far as we know. Anyone out there notice something similar? Oh, and one more thing . . . midnight isn't empty. There are slithers, which are sort of like snakes (except they fly, sometimes) and darklings, which are pretty much any shape they want to be--as long as it's a big and scary shape. That's one thing you'll definitely notice about midnight: being number two on the food chain is a big change from being on top.

If you do find yourself walking around in the blue time, bring something made from stainless steel, and have a thirteen-letter word in mind. Darklings hate new alloys like steel, and have this epilepsy when it comes to 13s."

The first one was great and I loved the premise. The second I enjoyed a little less and there were more and more innuendos. I'm not dying to read the 3rd, but I will before I let my kid read it.

Peeps
There are no sexually explicit parts, however Since the basic premise is that Vampires are all suffering from an STD, it's probably not meant for young teens. The main character discusses disvarious actual parasites and I found them fascinating and the best part of the book.

Leviathan
"Prince Aleksander, would-be heir to the Austro-Hungarian throne, is on the run. His own people have turned on him. His title is worthless. All he has is a battletorn war machine and a loyal crew of men.

Deryn Sharp is a commoner, disguised as a boy in the British Air Service. She’s a brilliant airman. But her secret is in constant danger of being discovered.

With World War I brewing, Alek and Deryn’s paths cross in the most unexpected way…taking them on a fantastical, around-the-world adventure that will change both their lives forever."

I just started this one, so stay tuned for my review.